Sometimes the stars are aligned and a gamble turns into a treat, thus was my first exposure to Flunk.  In fairness I’d never heard of them until I received one of my usual emails denoting various upcoming gigs.  I just loved the flyer (as it turns out it was the cover of their Chemistry and Math LP) plus it was the 100 Club which I’d managed to avoid all these years, plus it was £12.50 (surely a typo!).  What could go wrong?

So rather than do the usual and Google the band to find out what they sound like, my friend and I took the gamble and just turned up.  So here goes:

For those who have not been there it’s synonymous with music since the 1940’s, having hosted many now famous bands during their formative years.  It’s underground, on Oxford St, and has a long narrow stage with a low ceiling and bars at both ends.  A few strategically placed pillars keep it up and at the same time obscure the stage for the 350 punters if full.  The gent’s toilets are proper R’n’R – graffiti covered and extremely dodgy – take a look at the pics (even the cockroaches had the good sense to leg it 😊).  I can imagine it getting pretty hot and sweaty, but not tonight, Flunk are not that type of band.  Hence the seating throughout, plus people sitting on the floor in front of the stage. 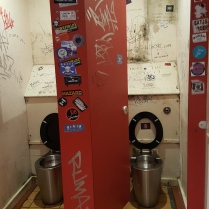 You don’t want to get caught short here! Spot the damp..

As I’ve mentioned, we turned up for this gig totally blind and the first band on mentioned that this was their acoustic set – so we assumed this was Flunk doing 2 sets – durr!  It turned out to be a band called Rumours (not the Fleetwood Mac tribute) a five-piece comprising drummer, keyboards, bass and 2 singers – Marion and Mark.  They have been around since 2015, formed in London, and are an ‘electro pop indie’ combo with Mark Borgazzi, Federico Bigonzetti and Marion Solheim as the mainstay (Italy and Norway then!).   I’ve no idea what the set comprised of but the songs were interesting and mellow with the lead singer looking like he’d verge on the side of Hip Hop at any moment.  Alas the vocal microphone mix was pretty poor so you couldn’t really make out what they were singing about.  But overall, I enjoyed a set of low key keyboard driven melodies and sometime catchy pop.  If you heard their songs in the background at a party you’d think this is pretty good, must check them out.  They have one EP out ‘Shapes’ and a single ‘Invitations’ with a great sleeve cover, might even download it!! 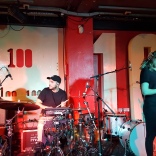 So, if you’ve been following the blog thus far, yours truly thought there was no support.  So, the stage was decluttered of Rumours gear and a totally different bunch came on – yes this was Flunk.  A traditional 5-piece from Norway comprising:

I had a grand stand view of the minimalist stage, leaning on a pillar just spitting distance from the band.  Anja wore a very colourful jacket and had many multiple coloured beads around both wrists – think M&Ms on a string you’ll get the idea!  Unfortunately, her mike stand was positioned badly and she spent an awful lot of time singing with her arm in the air covering her eyes from the lights (remember low ceiling!!).  Note: to Anja – next time move the stand or take the mike off when not using the guitar.

They were promoting their latest LP so 40% of the tracks were from ‘Chemistry and Math’, interspersed with songs from their back catalogue going back to 2004.  Again, the vocal mix wasn’t great and you couldn’t really make out what Anja was singing, just noise really.  On the whole they were pretty tight with Jo excelling with his guitar work, especially on the solos before landing back to a bleaker keyboard/vocal laden vibe. Ulf was in control of the programming sequences on the Apple laptop and was sort of half in half out of the band for the night. I’m sure he’s integral to the band but I don’t think pressing a few keys on a laptop qualifies as musician status (he did a bit of backing vocals mind).

I wasn’t long before I was tapping my feet to a number of rather catchy tunes.  I’ve seen them described as folktronica, but live they certainly are not that – too many riffs and solos.  I took quite a few videos and they are now on my YouTube channel if anyone is interested.  Alas, time is tight and I can’t be bothered to work out which songs they were (note: if anyone knows please let me know so I can update them).

*These were not played on the night.

At the end of the evening both bands hung around and chatted with the punters (you’re never going to get this at a big-ticket gig) did photos and signed stuff.  They all seemed lovely people and hanks to Anja for photos and signing my CD.

So, to summarise – Flunk, and to an extent their support band, pretty much evoke the musical landscape of the sounds you’d make if you lived near the Arctic circle without daylight for months at a time and consumed the odd spliff or six.  Words like bleak, angry/edgy, whimsical, melodic, ethereal, chilled all readily come to mind.

A real treat, loved the ambiance, the music and at £12.50 a real steal!  Now to check out their back catalogue!

Ps – I would have done this sooner but the following day was taken over by a severe hangover!