I was kind of excited about this gig, new LP recently out (very good reviews), touring ‘Grapes of Wrath’ 35 years anniversary and at a really good venue.  Plus two support acts, the Crazy Pink Revolvers and Folk Grinder and all for £15 – astounding value¬!!

I last saw them in 1984 and ‘85 so it’s been quite a while and Kirk is now the only band member remaining (well it is his band after all) from those early post punk days.  Now if

my memory serves me well their shows were always pretty raucous affairs and the die-hard fans know all the words and sing along drunkenly, the band play great and we all go home happy and elated.  As it was then, so it is now, nothing has changed much apart from we are all a touch older – greyer, balder or dyed.  Mind you that didn’t stop an excitable crowd having a bish-bash time in the mini mosh pit, all trying to keep their feet on the lager enriched skating ring of a floor.  The mosh got bigger as the gig progressed and I must admit that my mate and I were carried away with it all and dived in ourselves during the encores!  So much for growing old gracefully I hear you say?

Kirk stated on Facebook that they were ‘gonna make a racket !!!’ at the 229 and I can assure you all that they most certainly did.  Right on time at 9:45 the band hit the stage.  Their 75 minute set consisted of mainly showcasing songs from their new LP Tontine (weird name so checked it out on that interweb thingy and it is apparently an investment plan for raising capital, devised in the 17th century – you live and learn) plus the Grapes of Wrath and a few anthemic classics.

I’ve not heard Tontine but based on the gig I’ll be purchasing a copy sometime soon.  ‘Brighton’, ‘MK Ultra’ and ‘African Proverb’ were instant hits for me.  It’s good to get reacquainted with Kirk’s music again.  He’s another one of many bands I like that really should have been much bigger.  Their 80’s heydays might be past them but they put on one hell of a show all backed up by damn good tunes and they have a loyal following.  In my opinion they are still a class act!

The current line-up consists of Kirk Brandon – guitar; Adrian Portas – guitar; Craig Adams – bass; Phil Martini – drums (looking like a refugee from Lords of the New Church); Steve Allen-Jones – keyboards.  This accomplished bunch of musos have played earned their stripes with plenty of other indie bands in their time and as such strolled through the set with professionalism, passion and enthusiasm.  Kirk and Adrian’s dual guitar show mixes single note sparseness with a sprawling soundscape to devastating effect.  Kirk kept the between song banter to a minimum but he did give us plenty of chances to go mental and sing-along on various catchy tribalesque tunes. 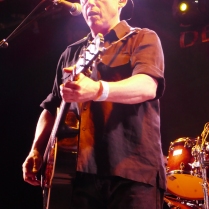 I rocked off back to the tube with the echoes of people singing ‘Come back, come back all is forgiven’ and ‘Liberate’.  All in all, a wonderful drink fuelled evening!  Bless you Kirk for still giving a toss!

Great start to the night, two blokes (acoustic guitar and accordion) gave a great rendition of bawdy sailor days of the past.  A pair of salty seadogs evoking skull and crossbones symbolism – an enchanting mix of drunken revelry.  They dressed the part, the accordion player having more than a passing resemblance to Jean Paul Gaultier in looks and dress, whilst Koozie Johns (the main man) resembled the press-gang commander.

I’d never heard of them before but now having seen them they strike me as a mix of The Urban Voodoo Machine and Alestorm (symbolism/lyrics though not music).   I’m unsure of what they played but I managed to video a couple of songs which were pretty darn good – see the video links below:

Songs for a drunken ale house of yore with an interesting modern lyrical twist.  Yo-ho-ho and a bottle of rum.  I found them very entertaining and will defo check them out again.

They are basically Stan Stammers (who he – ed) 80’s band, now recently reformed.  So why not renew your acquaintance with Kirk and do some support gigs.  Some of the songs appeared to be good but alas whoever was on the mixing desk did a dog’s diner with the sound.  Their look reminds me of a bunch of Michigan grease monkeys from those auto shows on cable tv.

Now it’s the first time I’ve ever seen a band with 2 bassists, with Stan on a wonderful 5 string.  Overkill?  I’m not sure it helped the overall sound or contributed anything else to the music.  I obviously don’t know any of the songs, but I’m sure they will get better with more shows under their belts.