Another first for me, a new venue in London for an intimate gig.  The Slaughtered Lamb pub basement in Farringdon – sold out capacity of 120 people (with say 20 odd stools at the front of the stage).  As it’s a tiny venue and we are all crammed in seated at the front you soon get to know everyone around you.  Luckily yours truly arrived just in time to take the remaining seats directly in front of Ian (why do people not like to go near the front?) – any closer and I’d have been playing!  The venue has a low ceiling, small bar (yippee!), even smaller merch stall, is lit in pinky/purple haze with some twinkly lights smattered around the small stage containing a Korg keyboard and 4 acoustic guitars, of which Ian only uses two, mainly the black Gretsch.  An evening of stripped down classic awaits – Ian unplugged finally.

Tonight, is a mix of old classics and new songs from his recent ‘Our Future in Space’ LP.  It takes a couple of songs to get the sound mix just right – the sound man was sat at the bar all night, and it looked like he likes a drink or three – so that might have been the problem – tee hee. 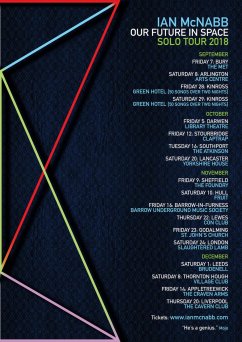 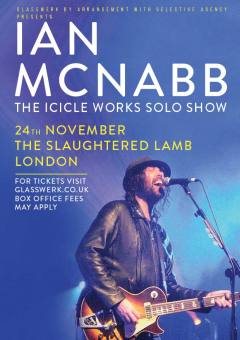 Now I’ve seen him a number of times with his band The Icicle Works, but never this close and personal.  Ian walks on promptly at 20:00 in trainers, jeans, t-shirt, checked shirt and hat i.e. scruffy as always – he won’t be modelling for Armani any time soon 😊.  Being a Scouser Ian has a good sense of humour which comes out in abundance throughout the gig both whilst chatting with the audience and ad-libbing during the songs – well as he says “Bob Dylan does it all the time” or during ‘Heart of Gold’ when the audience are singing along and forgot the words “just as well I’m here init”.  He’s a funny fucker! – just check out the videos links further down.

So mainly guitar songs, some with harmonica and two or three at the piano.  He’s a prolific song writer and as such has a back catalogue of classics to pick from, a lot of which were played during his 2 ¾ hour set (with a 15 minute break).  My mate Nick and I thoroughly enjoyed the show and at £14 a ticket it’s an absolute steal – you should be charging a lot more Ian!!  It’s a travesty that he’s been mostly ignored (by TV/music press) or simply forgotten by the vast majority but at least he has a diehard fan base to keep him going.  He’s doing the social media stuff e.g. Twitter, FaceBook to keep his name out there and I suppose the only way to make a living these days is to tour, tour, tour and sell merchandise at the gigs. 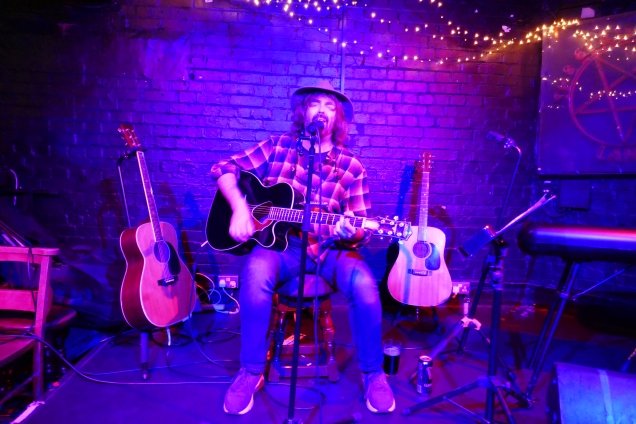 I took a photo of the setlist but he didn’t do it in the order listed and added audience requests such as the encore ‘North of England’.  So, to the best of my 8-pint lager/Guinness knowledge he defo played these tunes:

Click on the hyperlinks in blue to go to my YouTube channel where you can watch Ian in action (plus some very out of tune audience sing-alongs) – well worth the time in my humble opinion.

He’s definitely got a bit of 70’s Neil Young about him, another scruffy Herbert but a total genius.  And so a fitting end to a great night with the classic Young cover ‘Heart of Gold’ somewhat ruined with piss poor singing by the audience!

So I’m very happy, at the end of the gig Ian leant over and gave me his plectrum, apparently he’s never seen anyone giving it large to ‘Clarabella’ before.  Plus a signed LP (wot not on 180g vinyl or with a download code for the mp3) and photo with him – what’s not to like.

So ‘The Icicle Works’ are back in London in May 2019 – I’m just about to order my tickets!  Thank you, Ian, for a wonderful night and sorry about the singing 😊.