So, a couple of summer outdoor festival gigs for Noel and his High-Flying Birds in support of their ongoing ‘Stranded on the Earth World Tour 2018’ to showcase the ‘Who Built the Moon?’ LP.  Yesterday Scarborough today Greenwich and it’s England World Cup quarter final day!  Yes, you guessed 30° sunny, pubs open and loads of pissed up blokes singing “It’s coming home” all day/night – music, booze, football what’s not to like?

The gig is next to the Thames/Cutty Sark in the Old Royal Naval College grounds and we’re on the Artist guest list for tickets – it’s all about who you know right folks!!  Relax in the cordoned off champagne bar or for the paying punters a selection of overpriced alcohol in plastic glasses, long queues for the food stalls and dodgy toilets – it pays to know the right people!!

On a hot muggy night, it was pretty much a sell-out crowd (quite a few empties in the freebie area at the front mind).  Most of the mixed bag of old/young, trendy/hipster/footy attired audience were in shorts/skirts and had clearly had a few sherbets!  Although it was a seated event, no one was actually seated throughout the entire gig.  Up on your feet, bopping along to the more up-tempo songs such as ‘Holy Mountain’, swaying hands in the air and big sing-alongs to all the anthemic Oasis tracks. Nostalgia rules!  I don’t know whether I should mention it here but I preferred Blur in the 80’s.  I kind of guess that the audience was split in two camps, those wanting a trip down memory lane and those who are into his new incarnation.  It was certainly the memory lane tunes which brought the biggest applause and mass euphoric sing-a-longs. 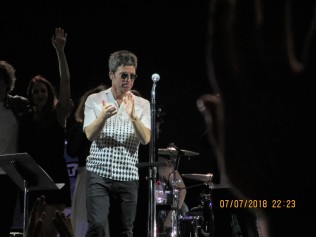 The HFB comprise an 11-piece combo (bass, drums, 2 guitars, keyboards, 3 brass instruments, plus 3 ladies – singer, keyboard, and tambourine/phone – don’t ask!).  Given that 6 of the ensemble were used intermediately I’m not sure of their value to the gig.  Quite frankly Noel in a standard 5-piece band would have been quite fine.  Two of the ladies pretty much did nothing most of the time – how exactly do you get a gig like that – ah yes you know someone!!  The singer was had a pretty good voice but she was only used a few times.  I can understand the brass section as ‘Who Built the Moon?’ is a bit of a departure from his older stuff (mid-tempo anthems and Beatles) and has a funkier feel.  Good man, it’s good to experiment and try new things out.

Now I was lucky enough to be stood right in front of Noel centre stage. He was at his moody cocky snarly best.  The band came on at 20:30, finished at 22:22 and entertained the whole time.  Dressed in a laid-back short sleeve shirt, Noel’s guitar powered through a feast of new and old tunes and he genuinely looked like he wasn’t going through the motions. I’m guessing he quite enjoyed it but he’d never let on!  The backdrop video screen added a bit of sparkle though nothing majorly ground breaking.  Just as well coz the lighting was nothing to write home about. 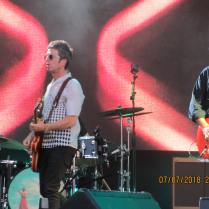 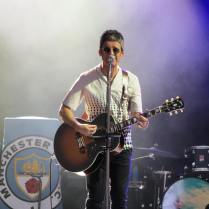 He said nothing for the first hour, it was just song after song.  He then engaged with some of the audience with sarcastic banter “you’ve come over from America for this gig, bet your glad it wasn’t Scarborough – aka shithole”, “have you put two blow up swords together to form some scissors”, “hello sailor” to bunch of guys wearing sailor hats and a number of references to the football result and the constant singing in-between songs of ‘It’s coming home’ – “Seriously, though – it fucking so isn’t.  It fucking is not. It is not.”  Que loads of boos, he then added: “You fucking know it, and I know it.”  Obviously, the Irish in him doesn’t allow and English sentiment.  Mind you he doesn’t mind covering his speaker stack in a huge Man City flag – football still rules!

The drummer was excellent throughout starting off most of the songs to a 1,2,3,4 on his drumsticks and pounding down the powerful rhythm.  Bass and lead guitar (with the Paul Weller haircut) kept it tight all night and followed Noel’s every move slickly.  The keyboards simply added to the expansive propulsive sound with the exception of ‘Supersonic’ which was stripped of its energy and drive as Noel did it acoustically.  I preferred the more up-tempo songs, they are quite empowering.

Noel can certainly write a song that’s not up for discussion.  Anthemic stadium rock if you will.  So, a 50/50 mix of old and new, slowly moving his audience into fresh fields.  A few more HFB albums and I wonder if he’ll still perform any of the old Oasis classics?

The set ended with the mass singalong to The Beatles ‘All You Need is Love’ and Noel said goodbye with an assured “See you soon” – he might, he might not.

This young 6-piece indie band hailing from Scotland were surprisingly good.  It’s always a plus sign when you have a charismatic enigma for a lead singer.  He took a bit of stick about the football (tee hee), from a sparse crowd but those who watched and listened appeared to enjoy it.

They were a bit Courteeners/Vaccines in musical style and were pretty engaging.  Good luck chaps!

A flag draped over the keyboards XV Brigada Internacional No Pasaran references paramilitary units manned by foreign volunteers the Spanish Civil War. I’m guessing one of the band had family involved in this? 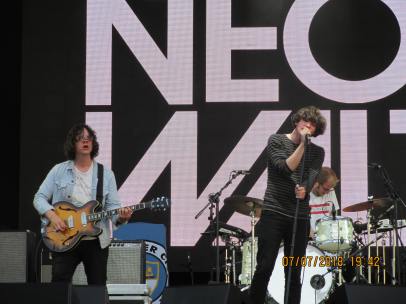 I videoed a couple of songs – check them out: