As I’m writing this I’m still in awe of last nights performance.  Stunning musicianship from people at the top of their game.  As I went down the stairs I immediately saw Carl’s somewhat reduced drum kit (well it’s not the 70’s any more 😊) centre stage and that was it.  Keyboards? What no keyboards, surely some mistake?  Correct no keyboards!  Instead Carl was brilliantly supported by two outstanding guitarists in the form of Paul Bielatowicz (guitars) and Simon Fitzpatrick (bass and Chapman stick).  Add a bit of technical wizardry, and some hocus pocus black magic and you get keyboard sounds played on guitar!  Bloody marvellous, you can’t fail to be impressed.  Also, as I was to find out NO vocals either.  As it happens this didn’t detract from the show one tiny bit.  It was still mesmerising to watch.

Now then as is my want I can always see a looky-likey in the band and Paul looks like an early cross of Steve Howe/Steve Hillage and Simon has a passing resemblance to Novak Djokovic.

Under the Bridge, is a great venue (under the East Stand at Chelsea FC Stamford Bridge stadium) where you can get right up to the band.  It was say 80% full with grey haired and bald prog rockers of a certain age (yes they were all old enough to have seen the great bands in the 70’s) plus a smidgen of their offspring and partners.

The band generated a wave of sound playing their instruments as if their lives depended on it.  Carl is no spring chicken at 68 but by hell he pounded the living daylights out of his drum kit.  Fit as a fiddle the bloke is.  They all looked to be having such fun together playing some classic prog tunes to a wildly appreciative audience. Paul in particular was constantly smiling (probably thinking I can’t believe I’m in Carl’s band I’ve got the best bloody job in the world).  I’ve always admired a guitarist who plays every single note with his mouth! His face contorting wildly to every note he played.  His technical ability is stunning and his onstage presence was infectious!  Steve, is a typical bassist i.e. not much movement, but hell can he play the 6-string bass and 10-string Chapman stick.  And then there’s Carl holding it all together with his years of experience.  He’s a powerhouse of complexity and energy – still one of the best drummers around!

They started with “Abaddon’s Bolero” in darkness until halfway through when the lights came on.  They then kicked into a storming “Karn Evil 9”.  Between most songs Carl popped out from behind his kit and introduced songs or gave us some anecdotes about his old band members, Keith and Greg who sadly both passed away in 2016, before once again disappearing behind the drums to apply sheer vigour pounding the skins.  Things slowed things down a bit during the complete version of “Trilogy”. 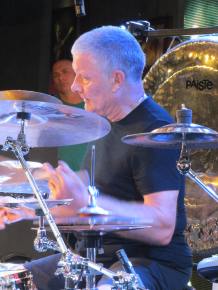 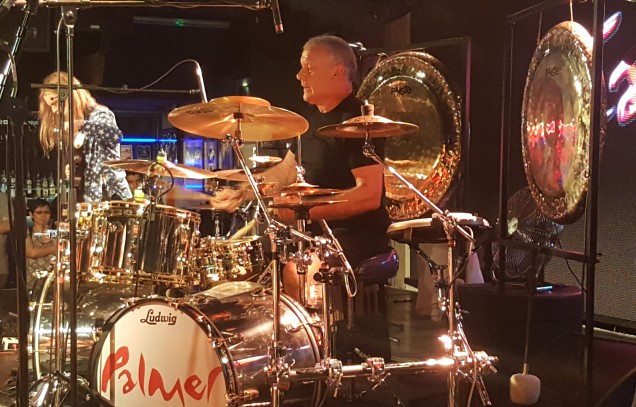 Each band member did a solo (well it is prog rock after all!!).  Simon on the Chapman stick doing a medley of “Take a Pebble / Maple Leaf Rag / From the Beginning”, playing rhythm and lead simultaneously – wow!  Paul’s guitar solo was Debussy’s “Clair de Lune”, his fingers flowing across the frets like Tinkerbell spraying fairy dust all over the strings.  Carl obviously nailed his drum solo getting a big roar every time he hit the huge gongs behind his seat.

He introduced a song Greg wrote, an extraordinary bombastic version of “21st Century Schizoid Man,” which had everyone in delirium.  The songs were chosen carefully i.e. ones without too many vocals but when he gave us the story of “Lucky Man” breaking them big in America I was wondering how are they going to pull this one off?  I’m still not sure how they did it with the instruments doing the ‘singing’ but they did with aplomb!  They wrapped it up with “Fanfare for the Common Man” and encored with a bastardised version of Tchaikovsky’s “Nutcracker” aka “Nutrocker”.

The musicianship throughout is just incredible, exactly what you’d expect from a prog band!  I was astonished by the mind-blowing musicianship on stage tonight.

At the end, time for one last beer and then of to the merch stall and meet the band who kindly took time out to meet and greet their fans and sign stuff, pose for photo’s and chat.  Yes I’ve now proudly got a Tarkus drum skin, all signed, proudly sitting on my wall and am waiting to frame the pic of Carl and yours truly! 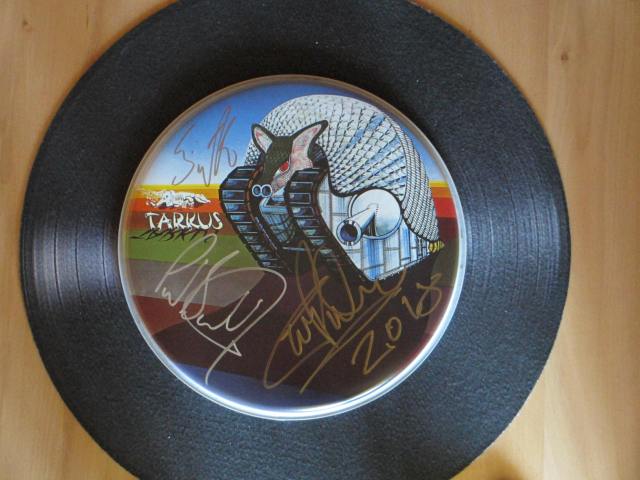 Thank you Carl, prog royalty in deed, for keeping the ELP flame burning brightly.  Long may you continue to charm audiences.  I for one will be going again!  For £25 it’s the bargain of the year!  As my mate Nick said, “sometimes you’ve just got to put your phone down and watch”.

Before I forget, the new band logo is just a brilliant bit of inspiration.  Keeping the classic ELP logo and juts extending the L to Legacy.  10 out of 10 for the guy on Photoshop!!